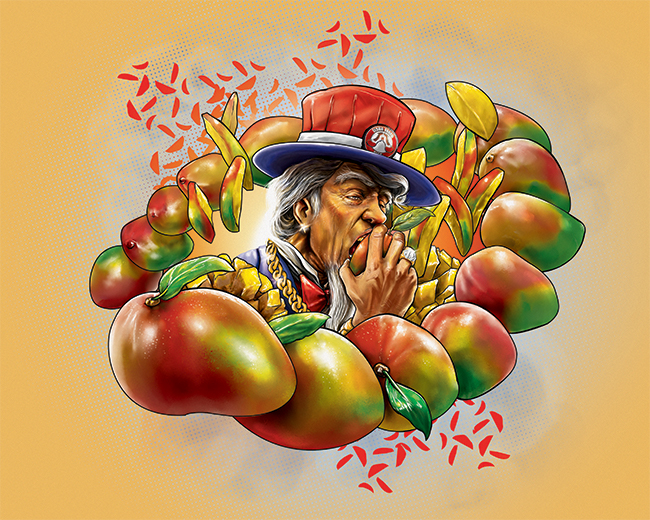 The Origin of Mangö Kölsch: A Clown Shoes Story

The Origin of Mangö Kölsch, brought to you by Jim’s Tötally Accurate Stories©

Jim Ronemus, Clown Shoes Beer’s Sales Execution Specialist, is our guest author for this history of Mangö, our American Kölsch.

A few years ago, during a Clown Shoes launch event at a pub in Phoenix, AZ, I was handing out samples, starting with our lightest beer. An elderly woman at a nearby tabled excitedly said in a thick German accent, “Oh, I do love a good Kölsch!” Then I mentioned the mango part and she waved her hand derisively, looking away, and sneering, “That’s no Kölsch.” Her more polite family ordered a round for themselves, while she angrily refused to even taste it.

That pleasant old lady was right, though. It is true that Mangö Kölsch is not Reinheitsgebot – the beer purity law of Germany that states it must only be made with malt, hops, water, and yeast. A law originating as far back as 1293 in Nuremberg, following the Holy Roman Empire rules for brewing. Leave it to Clown Shoes to ignore 700-year-old standards by adding mango puree to a 100-year-old style of beer and still call it a Kölsch right there on the label, with the capital K and umlaut and everything.

In July of 2013 & 2014 we released a limited American barleywine called Crunkle Sam, boldly proclaimed a “refreshing summer treat.” It was 11% abv. The joke was funny the first 2 years, but most of the sales team felt a change was needed in 2015. Gregg, believing jokes should last at least 3 years, vehemently disagreed, drawing the sword he kept hidden behind his office door. After a fierce battle with many casualties, Gregg offered a truce, declaring, “Fine! I have grown bored with this melee! Now go and make the opposite of a barleywine!”

Several experiments and a few explosions later, Dan and Bryan came out of the laboratory, covered in soot, eyebrows singed, carrying a tall pitcher of golden, radiant, crisp Mangö Kölsch. Sampling heavily at a 9 am meeting because it has fruit in it and fruit is a legit breakfast food, the team gave enthusiastic approval, so we brewed a batch and packaged it in 22oz bombers. Michael, locked away in his hidden tower prison among the barren wastes of western Massachusetts, designed a label featuring Crunkle Sam ludicrously chomping into a whole mango, clearly disregarding fruit etiquette, a visual metaphor of the irreverence toward Reinheitsgebot contained within. And those bottles flew right off the shelf.

We brought it back the next year as 6-pack bottles, and demand was so high that another brewery in New York had to be contracted to meet production needs. Dan definitely enjoyed driving all the way to NY to oversee this. He even said so with no irony probably. As with the 22oz bottles, the 6-packs barely made it to shelves before they sold out. And so we figured it made sense to add Mangö to our year-round lineup. It took three years before we could finally keep up with the demand. To 6-pack cans, then 12-packs, and 16oz 4-packs, Mangö became a staple of the Clown Shoes lineup.

And so, friends, here we are, celebrating the beer that gave Clown Shoes a shot in the arm to broaden our horizons after focusing mainly on big abv and bold flavors. Dan even admits the original plan was to “dry-hop the shit outta it with Mosaic” but the cleaner, subtler Mangö Kölsch was the clear winner. Cheers!

Find out more about Mangö here, and use our Beer Locator to find it near you!