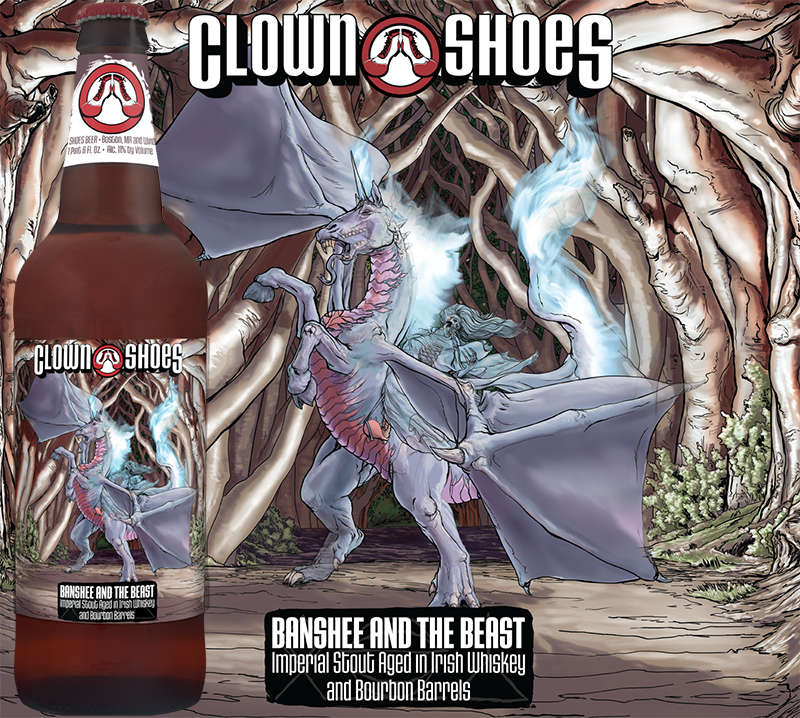 The Banshee and the Beast

Donning my smoking jacket, I stepped into the eerily silent Gaelic night. With wife and children at rest, I was weary-yet-restless and in need of the quietude afforded by the Irish wood in which our rental cabin resided. Mere moments into a serene walk of reflection, the still night was disturbed by a lone, piercing scream from deep within the forest.

The poor soul could not be left to certain doom. Over damp leaves and into increasingly thick tangles of branches, I found that the overhang of trees deep was steadily closing out the moonlight above. With just enough visibility to make my way onward, but less feel for my location and proximity to the cry, once more the bloodcurdling cry came, much closer now. Pausing with alarm at the scream, suddenly the pounding of hoofbeats arose. Rapidly coming closer, the speed of this unknown force left barely enough time to duck behind a nearby fallen oak.

What galloped by me was a riderless creature best described as a Beast. Massive, with thick legs roped with muscle and a smooth dark gray coat, in a flash I realized this monstrosity was some kind of horse-dragon crossbreed. With gargantuan, leathery wings and a massive horn protruding from the top of its head, it burst into a clearing ahead. Darkness there gave way to an ominous glow, white as the light of the moon yet shining from below on a cloudy eve.

Terror coursed throughout, and yet with every instinct screaming to flee back to safety, I felt a hypnotic pull to the edge of the clearing for a closer look. The glow intensified to a spot in the center of the clearing, emanating from what appeared to be a kneeling woman, with an otherworldly presence. Her face was a translucent pale, skull practically exposed under a wild tangle of blonde hair. Instead of hands were long, bony claws, and she was clothed in a billowing shawl. The Beast had slowed its gallop to a trot around the perimeter of the clearing, then stopped to raise up on its hind legs and bellow a mighty roar.

The almost-woman looked up at the Beast as it lowered, and out of her mouth came a piercing wail. I realized now that this was the “victim” who I had been searching for; not a woman in harm’s way, but a Banshee. My vision blurred and my hands flew to my ears as the proximity to the wail brought me to my knees.

I watched as the Banshee rose from the ground and glided up to, and then onto, the Beast. The beast reared back and roared as the Banshee unleashed a mighty wail, and in awe of the overpowering sight it took a beat before I realized that both of their eyes were trained on me.

Turning to run, my sleeve caught on a branch. A desperate tug freed my arm but left a deep gash from which I felt the hot flow of fresh blood. I broke into a sprint, desperately fleeing through the dark forest as they closed in. Leaping over brush and fallen branches, I knew it would not be long before I met my end. Gasping for air and tearing through this dark wood, my foot caught on an exposed root hidden by the darkness and I flew forward onto the ground.

Thoughts of my family came to the fore. A happy, comfortable life I left behind when I closed the cabin door less than an hour before. Hoofbeats grew louder then slowed to a halt, and I knew that my end was mere moments away. Rolling onto my back, there stood the Banshee and the Beast.

Both pairs of eyes focused upon me. Was I to be eaten? Made a sacrifice? How was it to end? Any hope of escape felt futile, I merely quivered in terror on the forest floor. Steam emitted from the nostrils of the Beast as it gave a snort and knelt forward on its fore legs. The Banshee slid off its back and, in what felt like an eternity, slowly made her way before me. The translucence of her skin, if it could be called that, emitted that blinding glow, yet still exposed the bones beneath. The air grew cold and thick as she neared, a chilling mist seemed to surround us in an instant. Only steps away, without breaking the cold, empty stare, the Banshee’s long bony army rose toward me as she let loose a bloodcurdling wail, and I lost what strength remained.

Then, suddenly, I was awake. Through a fog that seemed to fill not only my eyes but my head, I was standing, staring down, at my unconscious, shivering, defenseless self. I was somehow the Banshee, we shared a consciousness. Fear was replaced with wicked desire. This creature did not merely seek to harm me, through its eyes there was no doubt it wished to take my soul. I sensed a sudden shift in this heathen mind I somehow occupied, it was sensing my emotion, my frantic thought, my concern for my family safe and asleep in the cabin.

No. What had I done! The Banshee removed its gaze from my body and looked in a direction I knew was where the cabin sat. Resigned as I was to my own fate, I couldn’t let this creature disturb the souls of my innocent children without putting up whatever resistance I could muster. All I had left was my consciousness within this creature, and I screamed out through thought that I was there for the taking, but please show mercy to my family. The Banshee’s eyes lowered to my body once more, and it let loose another deafening wail that grew distant as my vantage from behind its eyes faded to black.

My eyes opened, back within my own body I looked up to find myself alone. They were gone! Without stopping to consider why, I scrambled to my feet and hurried back to the cabin as daylight began to emerge from behind the treetops.

I was alive, but still very scared. Too scared to keep up with fancy dialect. Just scared. And ready to leave. I woke up my wife and children told them to pack their things and get in the car, it was time to go.

And so we left. No one asked why, I think that even my youngest could tell that whatever had happened, we needed to get some distance from that forest. I drove and never looked back, thankful that the crappy Irish budget rental sedan we squeezed our family of five into stayed together long enough to roll back to the rental agency.

Not a day goes by when I’m not bothered by my night of terror. The scar on my arm is a physical reminder, but not nearly as powerful as the mental scars that remind me. Why was I spared? Where did they go? Will I ever see the Banshee and the Beast again? There’s still a shiver when I look into the non-Gaelic forest out our back window, and my heartbeat gallops like the rhythm of the Beast’s hooves, and I can almost make out the faint glow of the Banshee, and my ears fill with the shrill terror of her cry. Something tells me that they’ll return for me someday, to collect what’s due for the mercy I was shown on that dark, dreary night.